Welcome to the website for The Clan Hope of Craighall Society

Officially Recognized by The Late Hereditary Chief of Clan Hope
Sir John Carl Alexander Hope, 18th Bt. of Craighall
and also by the 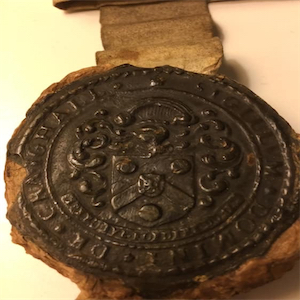 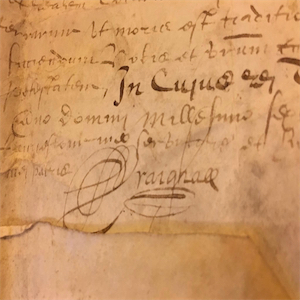 Craighall Seal and document from Sir John Hope, Sir Thomas Hope's son, and written in the 1636

We can finally announce a new lower price for our 13oz clan tartan material handled through Alexis Malcolm Kilts.
The price will be $50.00USD per meter plus her fee plus shipping and handling.
Thus a kilt would be $200.00 for the material plus for $250.00 Alexis Malcolm Kilts for a total of $450.00USD plus shipping.
This matches the price of $600.00AUD + GST St. Kilda Retail in Australia charges for their kilts in our tartan.
Cost for small items will be prorated from the $50.00 per meter price.

We will be offering to Clan Hope of Craighall Society members in good standing i.e. dues paid, a one time 5% discount on the purchase of a kilt and/or kilted skirt, regardless of whether purchased through Alexis Malcolm Kilts or St. Kilda Retail.
The purchaser will just need to submit their receipt to the Clan board of directors.
This discount will apply for up to two items, kilts or kilted skirts, purchased at the same time by Clan Hope of Craighall Society members.
Non members will pay full price.
Purchases can be made directly at either of our kilt maker's websites please click on the links above or Kilt Makers in the side menu.

Paul Robert Hope has been appointed as the Commissioner England.
This is the first time that Clan Hope of Craighall Society has had a Commissioner in England.
We welcome Paul stepping forward to take on this role for the clan.
We look forward to making new connections with Hope family and descendants
and widening the reach of Clan Hope of Craighall Society in the England

Colin Douglas Hope has been appointed as the Commissioner Scotland.
This is the first time that Clan Hope of Craighall Society has had a Commissioner in Scotland.
We welcome Colin stepping forward to take on this role for the clan.
We look forward to making new connections with Hope family and descendants in the land that is the original of our clan

Welcome to the new Membership Chair/Secretary

We are pleased to announce that Cynthia (Cindy) Hope Henderson has been appointed to the role of Membership Chair/Secretary for the clan.
We are very grateful that Cindy has stepped up and offered to take on this important committee position.
Cindy assumes the position officially on 1st November 2020.
Our complete gratitude also goes to the retiring Membership Chair/Secreatary, Janet Hope Higton, for the untiring service to the clan in what is such an integral part of the clan's fucntions.

New Commissioner for the state of Western Australia

This is the first time the Western Australia has had a Commissioner for Clan Hope of Craighall Society.
We welcome Veronica stepping forward to take on this role for the clan as she has already been instrumental in finding connections to Hope families in that state and we wish her well in her new role.

Membership Applications and Renewals pages are now working with all operating systems, browsers and mobile devices.